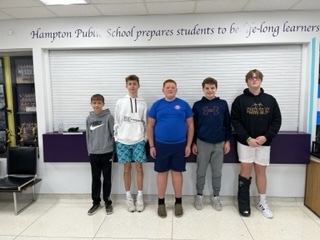 The Hampton Hawks are flying into a new exciting year with a Drones Program. The season will officially begin on December 10th in Crete.

Competitions this year will be exciting and difficult - difficult to find that is. Drone competitions are not as common as Robotics competitions just yet. If you were to look at a map of the United States and schools with this type of program, they are few and far between. In fact, Hampton is the only one in the state of Nebraska.  Without the addition of other teams in the state, the next nearest competition is in Colorado. Hampton is looking towards hosting a competition in-house if more teams can join.

This will be Hampton’s first full year of competitions with these high-tech instruments. The Hawks are ready and eager for competitions and have begun practicing for the season. Students in the drone program are Junior Grant Ferguson, Sophomores Max Mostek and Keyton St. John, Freshman Lofton Ferguson and Kyler Luebbe, and Seventh Graders Noah Miller and Brayden Wolinski. G. Ferguson stated, “I am excited for this year and am looking forward to the competitions. ”

The Junior High drones program students had their first competition in November. They began practicing with the High School team in December. During practice, they are learning and developing skills to program their drones to fly on their own. The Junior High team is expected to have fewer competitions with only four meets to attend while the High School has six matches to compete at all of which are indoors.

Not only have the Hawks found a unique program to set them apart from many schools, but the way they acquire funds for the program is unique through the school, Booster Club, and other fundraisers. Currently, the Drone program is fundraising through Raise Right.  When you sign up with the following promotional code: TPGJPVGR6GPP and buy a gift card from one of many different businesses, the business gives Hampton’s Drone Program a small percentage.

This program does come with some struggles. Richards stated that “Finding a time when the gym is open has been hard because we need the gym to practice in.”  The lack of competitions last year did pose a problem to the team as well, the school did have a drone team, however, they were only able to attend one competition the whole year.

Though they faced hardship last year, this year will be a new and exciting start for the team. With new members on the team and new competitions to attend the team is ready to conquer the competition.