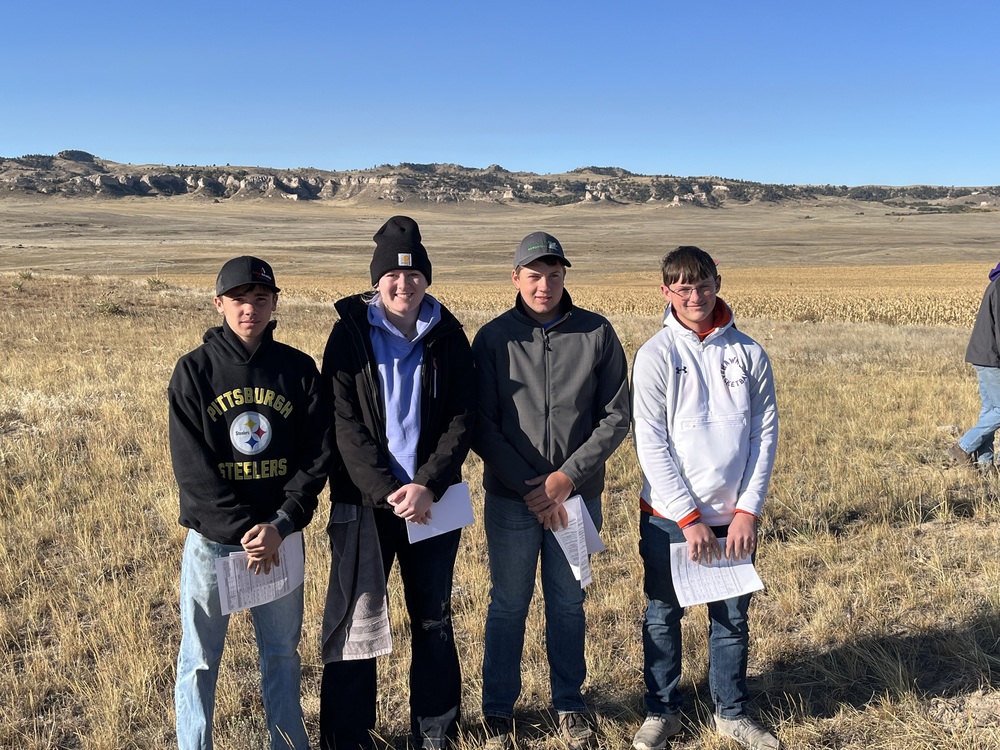 Hampton to Make Back to Back Appearances at National Land Judging

Under Advisor Joel Miller’s leadership, Hampton FFA qualifies for National Land Judging in Oklahoma City, OK back to back years. Senior Brooke Lubke, Senior Edward Van Landingham, Junior Korbin Stump, and Sophomore Jameson Doyle competed in Scottsbluff, NE at the state level on October 19, 2022 and earned a spot at the national competition later this school year in May 2023.

For preparation at the state level, the team looked at soil maps to see different depths of soil and textures that weren’t typically in this area. All of the sites had medium textures over moderate permeabilities. This means the soil had more silt within it instead of clay or sand. Knowing how to feel for that texture is very important. Doyle stated, “There was a much higher chance of seeing sand and rock influencing the competition. This was something we weren’t prepared for before the state competition. Miller and Mr. Marlin Seeman helped us with understanding these different textures and slopes.”

As the results were announced, nerves were growing getting closer and closer to the 1st place team announcement. Hampton’s team went from a district lucky runner-up to 2nd place in the state. The individual scores were Doyle 5th, Lubke 9th, Van Landingham 31st, and Stump 62nd. Overall, there were 32 teams consisting of 124 individuals competing at the state competition.

Before the state competition, 46 students from the Hampton FFA chapter competed in the district land judging contest on October 7th, 2022. The contest was held just north of Aurora in the Marquette area.

When results were released, Hampton was 13 points short of qualifying for state. Lubke took 11th place and was only one point away from qualifying for state as an individual. Following the results, Miller received notice that another qualifying team had backed out of taking the trip to state. Preparing for the state contest in just three days wasn’t an easy task but the team was ready to take on the challenge.